Felix Xu is Co-Founder and CEO of ARPA, Bella Protocol was the guest of the first-ever Citiesabc podcast with Hilton Supra, powered by citiesabc.com, openbusinesscouncil.org and fashionabc.org. He explains the technicalities behind his companies, the importance of Blockchain and DeFi in the current world, and how these technologies can be improved.

Felix Xu graduated with Finance, and Information Systems degrees from New York University, which is known for its Computer Science and AI research. For the past 6 years, Felix has been working on venture capital investment in Fintech, big data and AI startups. Most recently he led blockchain sector research and early-stage investment at Fosun Group, one of the largest conglomerates in China. He is also the Co-Founder and CEO of ARPA, Bella Protocol.

During the interview, Xu describes scalability as the ability of a system to handle increased load or traffic. In the context of blockchains, it is the ability to process more transactions per second (TPS) in order to meet the growing demands of users, something that layer 1 networks really struggle with.

Why is scaling such a problem?

“The two most obvious examples of a Layer 1 network are Bitcoin and Ethereum. These blockchains are base networks – they handle every aspect of every transaction on-chain and without assistance from any other network.

But this makes transactions on those blockchains extremely heavy and slow – every single new transaction needs to be validated by the network; then, before a new block is added to the chain, it requires to be checked against the entire history of the network. There are no shortcuts in layer 1 blockchains.”

The importance of Layer 2

Xu also touches upon the importance of Layer 2. Layer 2 blockchains are so-called because they sit as a second layer on top of a base mainnet.

“Layer 2 chains are designed to enable more transactions per second to be processed, and they achieve this by doing something novel – they move transactions off of the heavy mainnet. Different layer 2 solutions achieve this in slightly different ways, but the objective is always the same: streamlining the amount of information that needs to be validated by cumbersome underlying blockchain.

There is a multitude of layer 2 solutions currently being used with different blockchains, but for simplicity, let’s look at one of the most well-known, to better understand how it works.”

In fact, ARPA is a blockchain-based layer 2 solution for privacy-preserving computation, enabled by Multi-Party Computation (“MPC”). Founded in April 2018, the goal of ARPA is to separate data utility from ownership and enable data renting. ARPA’s MPC protocol creates ways for multiple entities to collaboratively analyse data and extract data synergies while keeping each party’s data input private and secure.

Bella Protocol is an aggregated user interface for existing Decentralized Finance (DeFi) protocols. It aims to simplify the user experience of existing DeFi protocols and allow users to deploy their assets and earn yield with ease.

“Our protocol aims to create a better user experience by eliminating the high fee and slow transaction issues that can affect some blockchain platforms like Ethereum while simultaneously improving the user experience through its simplified DeFi smart portal.

Bella’s smart pool feature allows users to access the best yields available in the DeFi market while benefiting from nearly zero gas fees since these are directly subsidized by the platform. The project launched in September 2020 as the first project distributed via Binance’s Launchpool platform, and has secured investments from several prominent firms, including Arrington XRP Capital and Ledger Capital.” 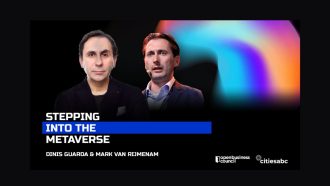 The Metaverse Offers A Great Promise: What Should We Look Out For?

Society 5.0 And How The Metaverse Has The Power To Transform Our Cities

Infographic: How To Build A Metaverse

Jason Michael Primrose, Author Of The Lost Children Of Andromeda Series, On The Essence Of A Creator Community On Dinis Guarda YouTube Podcast

CEO Of Iconic Moments, Chris Cummings, And Dinis Guarda Discuss The Role Of Web 3.0 In Leveraging Storytelling For Museums And Cultural Institutions At The Latest YouTube Podcast

Tech For Good And Five Technological Innovations For Sustainability

The Value Of NFT Art Amid Crypto Crash: One In Five NFT Artists Earn At Least $96,000 Per Year