Addis Ababa is the capital and largest city of Ethiopia. It is located on a well-watered plateau surrounded by hills and mountains, in the geographic center of the country. Only since the late 19th century has Addis Ababa been the capital of the Ethiopian state. Its immediate predecessor, Entoto, was situated on a high tableland and was found to be unsatisfactory because of extreme cold and an acute shortage of firewood. The empress Taitu, wife of Emperor Menilek II (reigned 1889–1913), persuaded the emperor to build a house near the hot springs at the foot of the tableland and to grant land in the area to members of the nobility. The city was thus founded in 1887 and was named Addis Ababa (“New Flower”) by the empress. 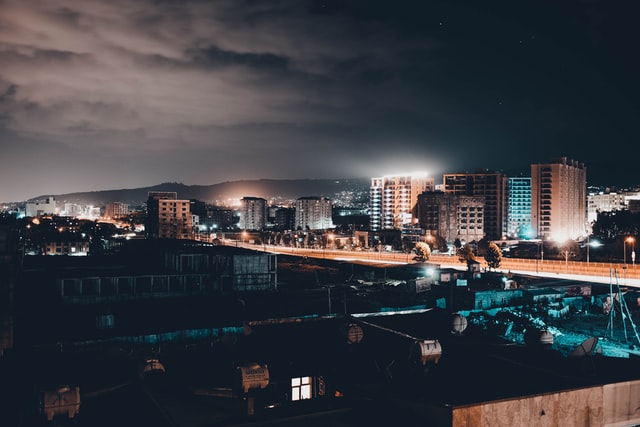 Addis Ababa is the capital and largest city of Ethiopia

The administration of Addis Ababa city consists of the Mayor, who leads the executive branch, and the City Council, which enacts city regulations. However, as part of the Federal Government, the federal legislature enacts laws that are binding in Addis Ababa. The residents of the city directly elect members of the City Council and the Council, in turn, elects the Mayor among its members. The term of office for elected officials is five years. However, the Federal Government, when it deems necessary, can dissolve the City Council and the entire administration and replace it by a temporary administration until elections take place next. Residents of Addis Ababa are represented in the federal legislature, the House of Peoples' Representatives. However, the city is not represented in the House of Federation, which is the federal upper house constituted by the representatives of the member states. The executive branch under the Mayor comprises the City Manager and various branches of civil service offices.

The economic activities in Addis Ababa are diverse. According to official statistics from the federal government, some 119,197 people in the city are engaged in trade and commerce; 113,977 in manufacturing and industry; 80,391 Homemakers of different variety; 71,186 in civil administration; 50,538 in transport and communication; 42,514 in education, health and social services; 32,685 in hotel and catering services; and 16,602 in agriculture. In addition to the residents of rural parts of Addis Ababa, the city dwellers also participate in animal husbandry and cultivation of gardens. 677 hectares (1,670 acres) of land is irrigated annually, on which 129,880 quintals of vegetables are cultivated. It is a relatively clean and safe city, with the most common crimes being pickpocketing, scams, and minor burglary. The city has recently been in a construction boom, with tall buildings rising in many places. Various luxury services have also become available and the construction of shopping malls has recently increased.

Addis Ababa’s revenue-raising capacity needs to match the urban economic activity better. Evidence shows that the city faces critical challenges in raising the municipal (own) revenue to finance its public expenditures. The city’s current public expenditure relies far too heavily on state revenues and grants, with the share of municipal revenue declining further overtime. With the growing demand for better services and modern infrastructure, the city must enhance its revenue generation capacity, not only by improving tax collection, but also by exploring other forms of resource mobilization, including attracting more domestic and foreign investments by improving the business environment. The city has also made huge investments in subsidized and affordable housing for its low- and middle-income residents. The production of condominium housing has been successful in increasing the city’s housing stock and improving the physical urban environment through slum reduction. These efforts, however, have been rendered less effective than anticipated as the housing offered is not affordable to the 20% of the city’s residents with incomes below the poverty line.

With increasing migration into African cities, the planning and design of emerging cities become increasingly important. More significant efforts to provide affordable housing, better transport links, and investments in infrastructure around Addis Ababa have shown tremendous promise in helping to shape the city into a more productive, inclusive, and liveable space for the new waves of urban dwellers.

Addis Ababa is relatively inclusive in terms of where poorer households live: there are relatively few areas with high concentrations of urban poverty, and government rent control allows many poor households to live near the center. Yet the rapid rate of migration into the city has put pressure on urban infrastructure and living conditions. The city’s housing stock is struggling to cope with increased demand, over 70% of which is characterized as informal by UN-HABITAT. Many new migrants live in informal housing constructed in the backyards of existing housing stock, while others are forced to relocate to the periphery, making way for new business and urban developments in the center.

Half of Africa’s tech hubs are found in only four countries: Kenya, Nigeria, South Africa and Ghana. These same countries account for three-quarters of the funds raised by start-ups – funds which are rising rapidly as investors are drawn to the continent. In 2018 alone, there was a four-fold increase in start-up funding compared to the previous year. The 29-year old tech entrepreneur has been invited to speak to delegates at a side event of the 32nd African Union Summit, where she hopes to persuade governments across the continent to support technology ecosystems. We need “safe places for us to experiment, fail and succeed in this start-up game,” she says.

Abiy Ahmed, 42, was elected prime minister and quickly made his mark with a series of sweeping reforms, including the release of thousands of political prisoners and the restoration of diplomatic relations with Eritrea. Also among his policies are changes to the business, finance, telecoms, and education, signaling that technology is now a priority for the government. With this in mind, Wondim and others believe that Addis Ababa could soon become one of Africa’s leading innovation centers, potentially rivaling Nairobi, Lagos or Cape Town.