Nairobi is the capital and the largest city of Kenya. The name comes from the Maasai phrase Enkare Nairobi, which translates to "cool water", a reference to the Nairobi River which flows through the city. It is situated in the south-central part of the country, in the highlands at an elevation of about 5,500 feet (1,680 metres). The city lies 300 miles (480 km) northwest of Mombasa, Kenya’s major port on the Indian Ocean. The city originated in the late 1890s as a colonial railway settlement.

When the railhead arrived there in 1899, the British colonial capital of Ukamba province was transferred from Machakos (now Masaku) to the site, and in 1905 Nairobi became the capital of the British East Africa Protectorate. From about 1900 onward, when a small Indian bazaar was established at Nairobi, the city was also a trading centre. The city is well served by roads and railways. The main routes are southeast and south to Mombasa and Tanzania and northwest via the highlands to Lake Victoria and Uganda. Jomo Kenyatta International Airport, 9 miles (15 km) to the southwest, is one of the chief international airports in Africa. 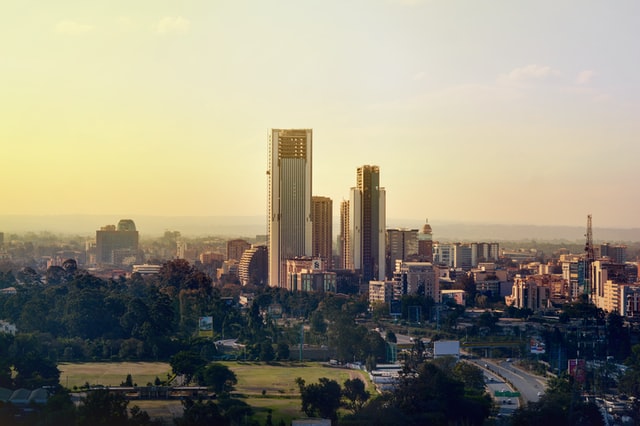 The City of Nairobi enjoys the status of a full administrative County. The Nairobi province differs in several ways from other Kenyan regions. The county is entirely urban. It has only one local council, Nairobi City Council. Nairobi Province was not divided into "districts" until 2007, when three districts were created. In 2010, along with the new constitution, Nairobi was renamed a county. Nairobi County has 17 constituencies. Constituency name may differ from division name, such that Starehe Constituency is equal to Central Division, Lang'ata Constituency to Kibera division, and Kamukunji Constituency to Pumwani Division in terms of boundaries.

Kenya has the most vibrant economy in East Africa, and Nairobi is the main commercial center of the country. Nairobi has a well-developed infrastructure, including modern financial and communications systems. Leading domestic (Kenya Commercial Bank) and international banks (Barclays, Citibank, Standard Chartered) operate out of Nairobi. Kenya also has a relatively well-developed industrial base, which accounts for some 20 percent of the gross domestic product (GDP). Nairobi is also the largest industrial center. The principal products include processed food, beer, vehicles, soaps, construction material, engineering, textiles, and chemicals. There is also a thriving sector that provides employment to carpenters, metal workers, furniture makers, vehicle repairmen, and retailers. The cornerstone of Kenya's economy is agriculture, which employs around 80 percent of the population, contributes 29 percent of the GDP, and accounts for over 50 percent of the country's export earnings. The areas around Nairobi are prime agricultural lands. The principal food crops are maize, sorghum, cassava, beans, and fruit. Cash crops, such as coffee, are grown by small-scale farmers. Horticulture is a new agricultural growth sector. Flower exports are an important source of foreign exchange.

In 2018 the county released its first Nairobi Metropolitan Area Infrastructure Report which sought to identify the distribution, supply, stock, deficit, needs, and investment opportunities in the Kenyan infrastructural sector with a bias to the Nairobi Metropolitan Area. According to the report, the Government of Kenya will have invested at least Kshs 3.9 tn in the infrastructure sector between 2012 and 2022. Electricity will have received the highest investment of approximately Kshs 1.7 tn, accounting for 41.9% of total funds invested driven by increased geothermal power generation and large scale projects such as The Last Mile Connectivity Program and the Rural Electrification Program. However, roads sector continues to have the highest number of projects, completed and upcoming, accounting for 67.3% of the total infrastructure projects.

Nairobi is home to the Nairobi Securities Exchange (NSE), one of Africa's largest stock exchanges. The NSE was officially recognised as an overseas stock exchange by the London Stock Exchange in 1953. The exchange is Africa's 4th largest in terms of trading volumes, and 5th largest in terms of Market Capitalization as a percentage of GDP. Nairobi is the regional headquarters of several international companies and organizations. In 2007, General Electric, Young & Rubicam, Google, Coca-Cola, IBM Services, and Cisco Systems relocated their African headquarters to the city.The United Nations Office at Nairobi hosts UN Environment and UN-Habitat headquarters. Several of Africa's largest companies are headquartered in Nairobi. Safaricom, the largest company in Kenya by assets and profitability is headquartered in Nairobi, KenGen, which is the largest African stock outside South Africa. is based in the city. Kenya Airways, Africa's fourth largest airline, uses Nairobi's Jomo Kenyatta International Airport as a hub. Nairobi has not been left behind by the FinTech phenomenon that has taken over worldwide. It has produced a couple of tech firms like Craft Silicon, Kangai Technologies, and Jambo Pay which have been in the forefront of technology, innovation and cloud based computing services. Their products are widely used and have considerable market share presence within Kenya and outside its borders.