Istanbul is Turkey's most populous city and its cultural and financial center. Located on both sides of the Bosphorus, the narrow strait between the Black Sea and the Marmara Sea, Istanbul bridges Asia and Europe both physically and culturally. With its historical peninsula, numerous scenic and historical sites, Istanbul is a magnificently unique city that has been the capital to many civilizations from past to present and still continues to be home to residents from all over the world. Istanbul's population is estimated between 12 and 19 million, making it one of the largest megacities in Europe and the world. Istanbul was formerly known as Byzantium and Constantinople is the most populous city in Turkey and the country's economic, cultural and historic center. Istanbul is a transcontinental city in Eurasia, straddling the Bosporus strait (which separates Europe and Asia) between the Sea of Marmara and the Black Sea. Its commercial and historical center lies on the European side, and about a third of its population lives in the suburbs on the Asian side of the Bosporus. Istanbul is one of the world's largest cities, ranking as the world's fifth-largest city proper and the largest city in Europe.

Since 2004, the municipal boundaries of Istanbul have been coincident with the boundaries of its province. The city, considered capital of Istanbul Province, is administered by the Istanbul Metropolitan Municipality (MMI), which oversees the 39 districts of the city-province. The current city structure can be traced back to the Tanzimat period of reform in the 19th century, before which Islamic judges and imams led the city under the auspices of the Grand Vizier. Following the model of French cities, this religious system was replaced by a mayor and a citywide council composed of representatives of the confessional groups across the city. 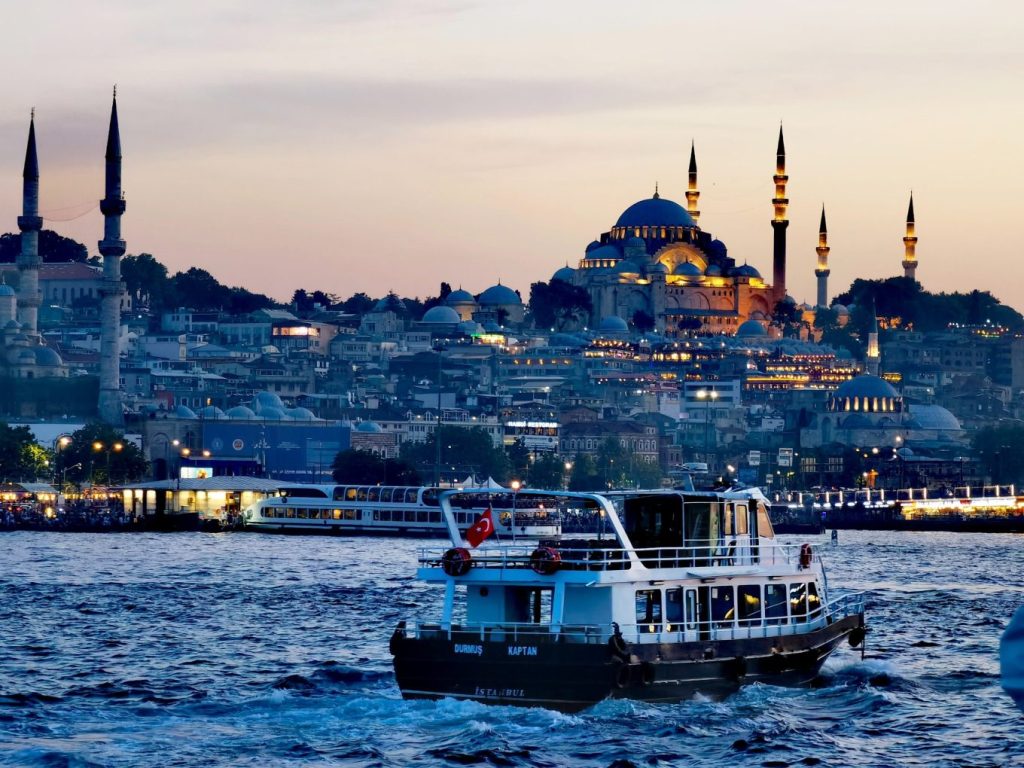 With a PPP-adjusted gross domestic product of US$301.1 billion, Istanbul ranked 29th among the world's urban areas in 2011. Since the mid-1990s, Istanbul's economy has been one of the fastest-growing among OECD metro-regions. Istanbul is responsible for 27 percent of Turkey's GDP, with 20 percent of the country's industrial labor force residing in the city. Its GDP per capita and productivity are greater than their national averages by 70 percent and 50 percent, respectively, owing in part to the focus on high-value-added activities. With its high population and significant contribution to the Turkish economy, Istanbul is responsible for two-fifths of the nation's tax revenue. That includes the taxes of 37 US-dollar billionaires based in Istanbul, the fifth-highest number among cities around the world. Skyline of a portion of the city, including several skyscrapers interspersed among low- and mid-rises, several historic buildings, parks and hilly terrain, and the waterway known as Bosphorus A view of Levent, one of the main business districts in Istanbul and home to the city's tallest buildings. As expected for a city of its size, Istanbul has a diverse industrial economy, producing commodities as varied as olive oil, tobacco, vehicles, and electronics.  Despite having a focus on high-value-added work, its low-value-added manufacturing sector is substantial, representing just 26 percent of Istanbul's GDP, but four-fifths of the city's total exports. In 2005, companies based in Istanbul produced exports worth $41.4 billion and received imports totaling $69.9 billion; these figures were equivalent to 57 percent and 60 percent, respectively, of the national totals.

Today Istanbul is a megacity, with over 14 million residents, and is soon to become Europe’s most populous metropolitan area. Its population has grown explosively since the middle of the twentieth century when it had less than 1 million residents. Most of this growth has been driven by internal migration from rural areas. Istanbul has benefited from Turkey’s vibrant economy, one of the fastest-growing in Europe. One of its major challenges is dealing with the consequences of that growth, developing the infrastructure to accommodate its new residents while retaining access to green space, water resources and high quality of life. New transport links are an important part of the city’s infrastructure development. The Yavuz Sultan Selim Bridge, the Marmaray Tunnel and the Eurasia Tunnel will all connect Istanbul’s European and Asian halves across the Bosphorus Strait. In addition, a third city airport is due to open in 2018. It will be one of the world’s largest, with a capacity of 200 million passengers per year.

With a partnership with Istanbul Metropolitan Municipality, Istanbul IT and Smart City Technologies Inc. (ISBAK), the city of Istanbul started its journey towards integrating smart city technology. With ISBAK, they hope to improve life quality. According to them, the main aim is to increase the quality of life of 15 million Istanbulites living in the city. Furthermore, the city also aims to increase the connection and competition for the 12.5 million visitors to this city.

Istanbul has been placed in the top 25 “brands” of cities in the world. With the journey of becoming a smart city, they hope to increase the city’s brand value. Furthermore, this journey should also bring a distinction of Istanbul among the other cities. During this journey, the city will cover a wide range of aspects within the city. In fact, it will include transportation, energy, security, social services, and environmentalism. The rapid urbanization being experienced in Turkey is forcing the country to make a quicker move towards the smart city ecosystem. The Turkey Informatics Association (TBV) has started the Turkey Smart Cities Strategy Initiative. They hope this will serve as a reference to all organizations that deal with the smart cities’ phenomenon.