The pandemic has clearly highlighted the limitations and restrictions of the UN and its agencies when having to deal with a menace which threatens the fabric, organization and foundations of the global society as we know it. This is the greatest global threat since WW2 - the world has had to deal with a treacherous, fiercely contagious, unknown and in some cases deadly enemy which has found its way in most of the countries, transgressing borders and political ideologies.

The United Nations‘s mission and mandate must imperatively and urgently be reviewed in the light of the events of the recent months. Its primary mission as defined currently and set just a few decades ago “is to increase political and economic cooperation among its member countries”.

It aims to maintain international peace and security, develop friendly relations among nations, achieve international cooperation, and be a centre for harmonizing the actions of nations. Seventy-five years after its establishment, glaring gaps in its reach and influence to coordinate actions against a new global threat came to the surface as the world grappled with the pandemic and the most powerful nations acted independently of each other thereby exacerbating the divide and polarizing the world.

The international institutions come out of the Covid 19 weakened and challenged, and they will have to redefine themselves under the new world order to restore confidence and legitimacy. The US has clearly disavowed the UN and has refused to take the leadership going forward.

Covid 19 has accelerated the polarization of the world and it has presented the most powerful nations with an ideal platform to roll out their nationalistic policies against global economic good sense. The world post-Covid 19 is definitely going to be fundamentally different to the one we lived in. On the one hand, the USA will lead the way in the western world seeking to reestablish and consolidate its economic supremacy.

The manufacturing networks and supply chains – especially in China, which accounted up to a few weeks ago for 30% of global manufacturing output were paralyzed and resulted in delays worldwide in the delivery of essential services and food, pharmaceuticals, electronics and automotive components, metals, and other manufactured goods.

This painfully highlighted the interdependencies of the democracies on China and resulted in a well-articulated and compelling case for reevaluating the supply chains and implementing radical shifts in production structures and trade policy.

On the other hand, China plans to take over the lead in global stewardship and ensuring that it comes across as a responsible global citizen whist further consolidating its economic reach around the world. Its actions during the pandemic clearly reflected its new posture as it distributed aid to the rest of the world. China has profited immensely from the liberal global trading system and is acutely aware that this is about to change. In the face of the looming shift in global supply chains China aims to support and develop new markets, so it can redeploy its manufacturing capabilities to satisfying these markets.

Is the world post Covid 19 rushing toward an inevitable polarization driven by the nationalistic populism of the democracies? Will we end up having two completely different types of economic and social development, one driven by the USA and the other China?

The US has made it clear that it has no interest to lead the world on global matters especially having anything to do with the engagement against the Covid 19. This void will be filled. It will be either the western big tech companies or maybe Europe. For the latter to happen Europe will have to accept that the US will always place its own interests above those of the international community, including Europe, and that it will need to reinvent itself and metamorphose into an independent, serious and modern post Covid 19 organization with a clearly defined and workable political and economic system.

Technology and cities visualisation, image by Dinis Guarda for citiesabc.com

Big tech and the democracies :- The turnaround

Big Tech companies based in the Western world have, up to recently, been threatened with more controls and regulations from the governments and as their influence grew so did the pressure for such controls. Their manipulation of elections in the western democracies through their platforms spelt their doom with calls for their breakup.

Covid 19 is about to change that as the governments acknowledge their shortcomings highlighted by the pandemic and as the threat of a powerful digital China emerges post Covid 19. In addition, the new world dynamics will be intimately entrenched in the robustness of Artificial Intelligence, the adoption of digitalization and the implementation of cutting edge and evolutive security protocols.

The role and influence of the big tech companies in the economies will be actively nurtured and they will be encouraged to further extend their innovations and development. The governments will strengthen them in the face of the China digital threat and will allow them even more financial might.

In the perspective of a new world order built on digital technology, artificial intelligence, blockchain and robotics would we be handing over to the big tech company matters of national security? Will the citizens be trading their job and health security for a world where there will be no privacy? Will the big tech companies set the rules of governance and regulate the societies they operate in? 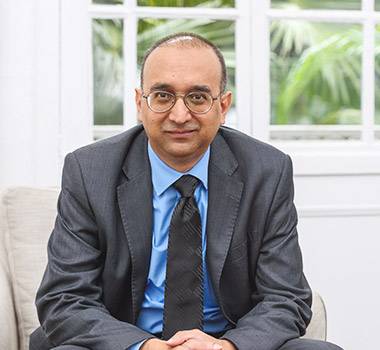 Saleem Beebeejaun is a global consultant and entrepreneur with over 20 years’ experience in senior managerial positions and operated at the highest level of large organizations as CEO and as Chairperson. Saleem’s experience spans across both the financial and non-financial services sector, in particular in the African region. He is an independent Chairperson of board, a director, a chief executive officer, advisor and an entrepreneur and interacts in a very diversified environment, interacting with people of different nationalities, background and cultures. He acts as business facilitator for many HNWIs and has an intuitive ability to gauge clients’ needs and believes in the value of true independent advice, away from institutional commercial pressures.

After completing his Licence – Lès Sciences Economiques from the University of Montpellier, France, Saleem Beebeejaun started his professional career as a supervisor working in the agricultural sector, mainly managing cane fields, with his grandfather. He subsequently undertook further studies in insurance and graduated as a Fellow of the Chartered Insurance Institute. He was awarded the H G Greening prize rewarding him as the first in Life subjects worldwide.

Saleem also followed the Advanced Management Program of the Harvard Business School and is a Harvard alumnus.

He is the immediate past and first chairperson of Warwyck Private Bank established in Mauritius and licensed by the Bank of Mauritius and is an adviser to Warwyck Investment Holdings the holding company of the bank.

Saleem has served as the Honorary Consul of Malaysia to Mauritius since 2008. He has been very active and has helped organize many missions and visits of Malaysian dignitaries to Mauritius.

Is There A Better Way To Live? Transformative Food Documentary BETTER To Answer Key Questions Endorsed By MDs At Harvard

Will COVID-19 Vaccines Put A Stop To Remote Working?

Any cookies that may not be particularly necessary for the website to function and is used specifically to collect user personal data via analytics, ads, other embedded contents are termed as non-necessary cookies. It is mandatory to procure user consent prior to running these cookies on your website.