• California is the state that has searched for NFT’s the most over the last twelve months.

• Nevada and New Jersey are the second and third most NFT obsessed states respectively.

• Kentucky, Alabama and Mississippi are the states least interested in NFTs.

These Are The Most NFT Obsessed States in America

New research has found that California is the most NFT obsessed state in America.

The study conducted by NFT experts Los Muertos analyzed all fifty states and District of Columbia in Google Trends to establish which states have been searching for NFT’s and related NFT search terms, the most over the last twelve months.

California took the top spot as the most NFT obsessed state, with the data revealing Californians searched for the term ‘NFT’ the most out of any state in the past year. California was also the ninth highest searching state for the term ‘Buy NFT’. The high ranking for California can be attributed to the numerous celebrity endorsements of NFTs.

New Jersey ranks as the third most obsessed state in America, searching for NFT’s at the third highest rate. In New Jersey, search interest in the term ‘NFT’ has skyrocketed 488% in the last year.

Coming in as the fourth most NFT obsessed state in America is Florida. Florida was the eighth highest searching state for interest in buying NFT’s. In Florida, there has also been a 75% increase in searches for the query ‘What is an NFT?’.

New York is the fifth most NFT obsessed state with the state searching for NFT’s at the sixth highest rate. New York was also the fourth highest searching state for the term ‘Buy NFT’, highlighting the interest the state has in acquiring them.

The least NFT obsessed in America is Mississippi. Mississippi is the state that searches for NFT and related NFT terms the least. Mississippi was also the fifth lowest searching state for the term ‘What is an NFT?’, implying that Mississippi isn’t interested in purchasing NFT’s at all.

Alabama is the second least obsessed state with NFTs, having the second lowest search interest out of any state whilst Kentucky searches for the term ‘NFT’ at the third lowest rate of all states in America.

Commenting on the findings, a spokesperson from Los Meurtos stated: “The rise in NFTs has been astronomical, not only in America but the world over with worldwide searches for NFTs rising 809% from this time last year. However, these findings offer a fascinating insight into the geographical disparity in interest in NFTs across America with coastal states being the biggest audience for NFTs. It will be interesting to see if this scale changes as NFTs become more mainstream and common in the future.” 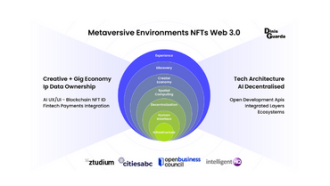 The Elements Of A Holistic Metaversive Environment

The Metaverse Offers A Great Promise: What Should We Look Out For?

Society 5.0 And How The Metaverse Has The Power To Transform Our Cities

Infographic: How To Build A Metaverse

Jason Michael Primrose, Author Of The Lost Children Of Andromeda Series, On The Essence Of A Creator Community On Dinis Guarda YouTube Podcast

CEO Of Iconic Moments, Chris Cummings, And Dinis Guarda Discuss The Role Of Web 3.0 In Leveraging Storytelling For Museums And Cultural Institutions At The Latest YouTube Podcast

Tech For Good And Five Technological Innovations For Sustainability