Medina also is known by its official name Al-Madinah is one of the three holiest cities mentioned in Islam. Chronologically speaking, Al-Madinah is the second most pious city in Islam, after Mecca and the third holiest city in Islam is Jerusalem. Its name also has an underlying meaning that translates into "the Radiant City, or "The city of Prophet" in English.

Al-Madinah is situated about 340 km north of the holy city "Makkah". The story of how the city got the attention is a distinct story of its own. Prophet Muhammad and his followers relocated from Mecca to the city of Medina after a plot to kill him were unveiled. The whole migration of the religious leader along with his followers is also known as "Hijra". This is also the same time when the Islamic calendar or the "Hijri Year" started the exact date of which is around 622 AD.

Since then the town of Al-Madina then known as Yathrib became famous. Al-Madinah is also known as the very same place from where Prophet Muhammad (PBUH) started the Muslim community. It is also the same place where his body is buried, and the tomb lies in the chief mosque of the city. The tomb where the Prophet is entombed is marked by a bright green coloured dome.

Al-Madinah is a municipality that is governed by Madinah Regional Municipality. The current mayor of the city is Khalid Taher, and the Provincial Governor is Prince Faisal Bin Salman. 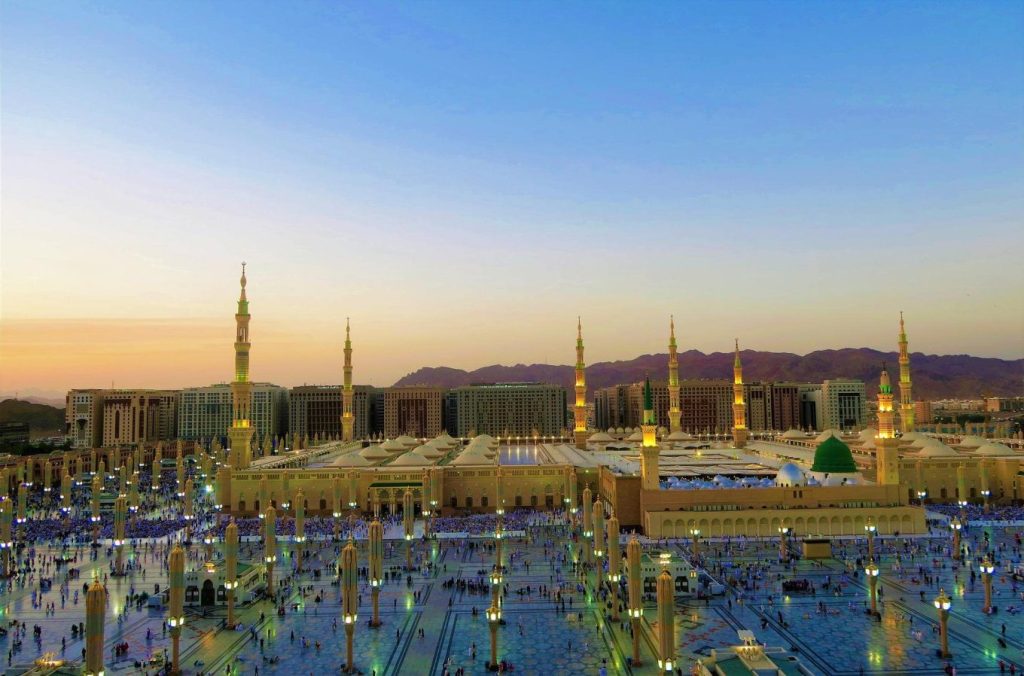 The city of Medina is famous for its date palms and other fruits which are processed and exported to other parts of the world. Medinah's major economy is driven by the cultivation of cereals, vegetables, and fruits.

Jewellery, armoury, and metalworking are some of the other small-scale business which operates in the city of Medinah. Although other occupations like tile making, automobile, carpentry are there in the city, Agriculture technology is the prime amongst them all.

Many industry leaders have ingrained their business in the land of Medina. Companies like MTD products, Westfield Insurance, and RPM International have their global headquarters in Al Madinah city. Multiple Swiss and Japanese manufacturers have served the automobile industry by establishing their business in the city.

In the early 1900's Medina was connected with the city of Damascus by the Hejaz Railway station. The station was however demolished in World War 1, and since then the reconstruction of the railway station has never taken place.

A railway that connects Medina with Jiddah has been constructed and works effectively till today. There are other roadways that connect the different cities like Mecca, Jidda, and Yanbu and link them to Medina.

Another roadway that stretches from the north of Hejaz connects Medina to Jordan. The other modes of transportation in the city is through buses, taxis, car rentals, and ride with locals. Buses are the most inexpensive way of moving from the airport to the city of Al-Madinah.

Taxis might be slightly more expensive for the wallet but will easily drop you to the city centre. The third option is to rent a car, and the last option is to travel with the locals. Al-Madinah is also popularly known for its airport, Prince Mohammad Bin Abdulaziz International airport.

Al-Madinah is a growing city in the cusp of modern amenities. The city is a pilgrimage site and thus to cater to the needs of pilgrims the city is continuously expanding and bringing all sorts of latest changes to the town.

Today there are many established hotels and malls that have come up in the city which are not only top-notch but also have everything from gold, apparel, accessories, electrical goods to international brands. The hotels offer the best of accommodation for any visitor and have the best of amenities. Even the restaurants have started serving international cuisines to suit the palate of tourists.

Although many companies have started making Medina as the epicentre of innovation, the schools here are still running and imparting knowledge on educational philosophies.

The main body of education in Medina province is the ministry of education. There are around 724 and 733 schools for boys and girls respectively.

Taibah High School is the most notable school in the city, and the Taibah University is the one which has around 16 colleges in Al-Madinah province.

The Islamic University established in 1961 is the oldest educational institution with 22000 students. The university confers degrees in Bachelor Of Arts, Masters, and Doctorates, admission of which is based on scholarship programs.

Medina has a cross-cultural environment and also accommodates people of many nationalities and cultures that live together harmoniously.

The Madina center of arts was founded in 2018 and had a collection of both modern and contemporary arts. The centre also launched the Madinah Forum of Arabic Calligraphy to patronize renowned calligraphers from around the city.

Where is Al Madinah and what is city known for?
The city is located geographically in the Hejaz location towards the western side of Saudi Arabia. Al Madinah is also known as the very same place from where Prophet Muhammad started the Muslim community.

What is the current population of Al Madinah 2022?
In 2022, the estimated metro area population of Medina is 1,545,000 and making it the fourth most populous city in the country.