Jerusalem is the capital of the modern nation of Israel and a major holy city for the three Western traditions of Judaism, Christianity, and Islam. It sits on spurs of bedrock between the Mediterranean Sea and the Dead Sea area.

Both Israel and the Palestinian Authority claim Jerusalem as their capital, as Israel maintains its primary governmental institutions there and the State of Palestine ultimately foresees it as its seat of power; however, neither claim is widely recognized internationally.

Historically, Jerusalem was an urban center for approximately 5,000 years. Today, Jerusalem consists of the modern, western section, built up after the institution of the state of Israel in 1948. The Old City is divided into four quarters: the Jewish Quarter; the Christian Quarter; the Muslim Quarter; and the Armenian Quarter. 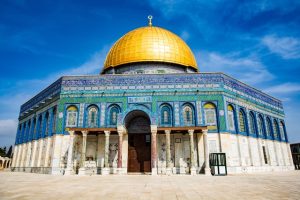 Data and Facts about Jerusalem

Prior to the creation of the State of Israel, Jerusalem served as the administrative capital of Mandatory Palestine.

Jerusalem is currently governed by a Municipal Council that is composed of 31 members who are elected every four years. The council is headed by the mayor, who since 1975 has been elected by direct popular vote. Israeli Jews form the largest and most politically active section of the population. Arabs in east Jerusalem, with few exceptions, remained Jordanian citizens after 1967. Most, however, regard themselves as Palestinians by nationality. Although they have the right to vote in municipal elections, few have done so, because the majority refuse to recognize Israeli sovereignty over east Jerusalem. No Arab has served on the Municipal Council since 1967, although some have served on the council’s staff.

Jerusalem is the hub of Israel’s government. It is the seat of the president, the Knesset (parliament), ministries, and the Supreme Court of Israel.

Extreme poverty is concentrated among sections of the Muslim population, particularly in the Old City, and among strictly Orthodox Jews; several neighbourhoods populated by Jews from Africa, Yemen, and the Levant are also economically disadvantaged

Since the establishment of the State of Israel in 1967, business activity and investment in the city have been stimulated by the housing boom and the increasing influx of pilgrims and tourists—except in periods of high political tension and violence, such as the two Palestinian uprisings known as intifadahs (1987–93 and 2000–05).

The establishment of heavy manufacturing industries has not been encouraged, in the interest of preserving the traditional character of the city. Combined with transport and marketing difficulties, this has limited the city to a number of small industries. There are still small workshops producing giftware, religious articles, curios, and printed fabrics.

Their service sector employs many people in education ,health and welfare, community and social services, hotels and restaurants and public administration. In fact, the national government has become a major player in Jerusalem's economy. It generates a large number of jobs, and offers subsidies and incentives for new business initiatives and start-ups. Although Tel Aviv remains Israel's financial center, a growing number of high tech companies are moving to Jerusalem.

Israel’s global prominence in high-tech industries has had an impact on Jerusalem: two high-tech office complexes—  the Jerusalem Technology Park in south Jerusalem, next to the city’s largest shopping mall, and the other in Har Hotzvim—employ thousands of highly educated scientists, engineers, and entrepreneurs. Both industrial parks are home to some large Research and Development centers of international tech companies, among them Intel, Cisco, Teva Pharmaceutical Industries, IBM, Mobileye, Johnson & Johnson, Medtronic and more.

Road construction has increased considerably in the city since the mid-1970s. Although traffic congestion remains one of the most acute problems for urban planners, Jerusalem is served by highly developed communication infrastructures, making it a leading logistics hub for Israel.

The Jerusalem Central Bus Station is the busiest bus station in Israel. The Jerusalem Light Rail initiated service in August 2011 and is capable of transporting an estimated 200,000 people daily although some parts are still under construction. Another work in progress is a new high-speed rail line from Tel Aviv to Jerusalem, which became partially operational in 2018.

Jerusalem is served by Ben Gurion Airport, some 50 kilometres (31 miles) northwest of Jerusalem, on the route to Tel Aviv. The Tel Aviv–Jerusalem railway runs non-stop from Jerusalem–Yitzhak Navon railway station to the airport and began operation in 2018.

Although Tel Aviv leads the startups scene in Israel, Jerusalem is home to more than 400 high-tech companies and every day entrepreneurs, investors, and tech workers increase in the city. Jerusalem’s growth and potential as a startup hub have gained international recognition in the recent years especially with the city being featured in the world’s top ten cities in the 2019 Startup Genome Report.

Jerusalem has a growing startup ecosystem, centered around exceptional academic institutions, such as the Hebrew University, with some of the world’s leading machine learning faculty, HUJI Innovate , a hub and accelerator for students, and Yissum, a first-rate tech transfer organization.

The Jerusalem Development Authority also recognizes the city’s complexity and diverse population and pursues initiatives to strengthen the economy and the tech sector. This mix is making Jerusalem a growing hub for design-led tech innovation in everything from autonomous driving to medical devices, and image editing software.

Healthcare in Israel is universal and participation in a medical insurance plan is compulsory. All Israeli residents are entitled to basic health care as a fundamental right. The Israeli healthcare system is based on the National Health Insurance Law of 1995, which mandates all citizens resident in the country to join one of four official health insurance organizations, known as Kupat Holim which are run as not-for-profit organizations.

Jerusalem has separate educational and religious systems for its Christian, Muslim and Jewish populations. The city is home to several prestigious universities like the Hebrew University of Jerusalem, founded in 1925 and ranked among the top 100 schools in the world. Other institutions of higher learning in Jerusalem are Al-Quds University, Jerusalem College of Technology, the Jerusalem Academy of Music and Dance and Bezalel Academy of Art and Design.

With more than 200 museums, Israel has the world’s highest number of cultural institutions per capita. A criss-cross of ancient streets and thousands of years of history, Jerusalem’s museums hold extensive collections of modern European and Israeli art, as well as ancient findings that were pivotal to the development of Christianity, Judaism and Islam. Some of the most important are The Israel Museum, Yad Vashem, Museum for Islamic Art, Museum on the Seam and Bible Lands Museum.

The most popular sports in Israel are Football and Basketball. Israel is an international center for Jewish sport around the world and since 1932 the Maccabiah Games, an Olympic-style event for Jewish athletes, has been held in the country.