Karachi is the financial capital of Pakistan and the capital city of Sindh Province. The city has been much admired since British colonial times for its location and economic potential. Today, Karachi is the most populous city in the world and also a major seaport to the otherwise landlocked country of Pakistan. The love and admiration by the people of Karachi to Quaid-e-Azam, Muhammad Ali Jinnah is visible all over the city in different monuments, buildings and landmarks associated & named after this founding father of the nation. Karachi is also well known for its archaeological sites at Thatta, Mohenjo-Daro and Kot Diji. The city also knows how to bring together an immense historical past to the present and on to a bright, bright future by protecting its heritage for generations to come.

Karachi is best known for being the business hub of Pakistan and one of the most densely populated cities in the world with a diverse and multicultural population drawn to the opportunities for employment and business. See also Islamabad. 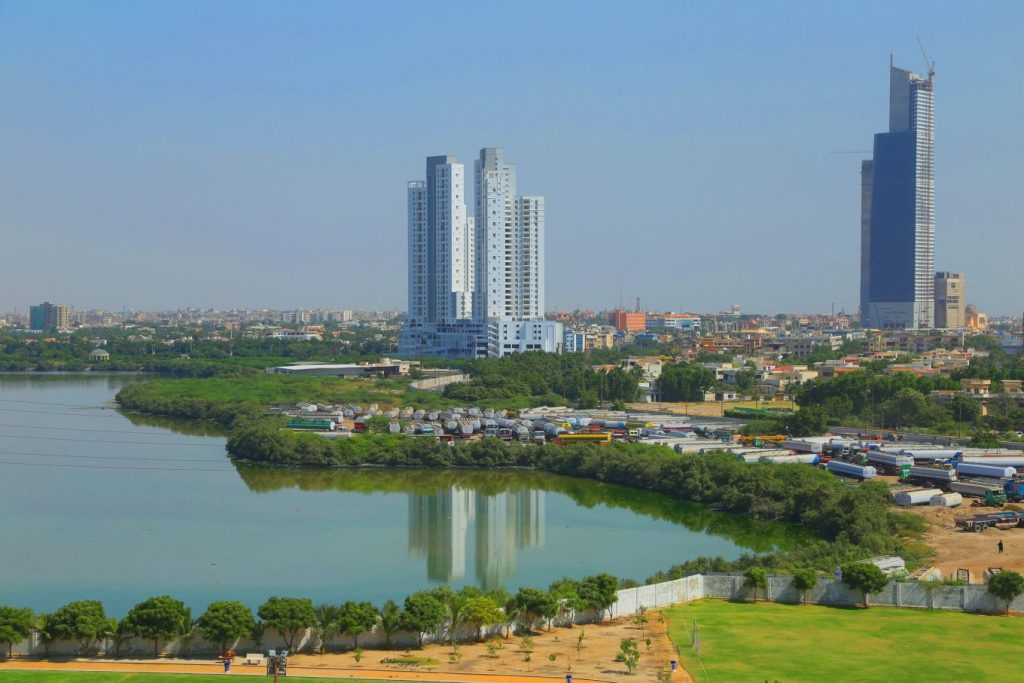 In 2011, City District Government of Karachi has been de-merged into its five original constituent districts namely Karachi East, Karachi West, Karachi Central, Karachi South, and District Malir. These five districts form the Karachi Division now. The city administrator is Muhammad Hussain Syed and Municipal Commissioner of Karachi is Matanat Ali Khan. There are also six military cantonments which are administered by the Pakistan Army.

Study about other cities of Pakistan: Lahore

Karachi is the financial and industrial capital of Pakistan. As of 2019, Karachi had an estimated GDP (PPP) of $164 billion. As of 2008, the city's gross domestic product (GDP) by purchasing power parity (PPP) was estimated at $78 billion with a projected average growth rate of 5.5 percent. The city accounts for about half of the total collections of the Federal Board of Revenue, out of which, approximately half are customs duty and the sales tax on imports. Karachi produces about 30 percent of value added in large-scale manufacturing, 20% of the GDP, the World Bank identified Karachi as the most business-friendly city in Pakistan. In 2010, research by the global human resources company Mercer found Karachi to be the most inexpensive city in the world.

A substantial chunk of Sindh’s GDP, around 95% is attributed to Karachi (the GDP of Sindh as a percentage of Pakistan’s total GDP has traditionally hovered around 25%/30%). Karachi’s GDP is around 20% of the total GDP of Pakistan. A PricewaterhouseCoopers study released in 2009, which surveyed the 2008 GDP of the top cities in the world, calculated Karachi’s GDP (PPP) to be $191 billion as of 2014It confirmed Karachi’s status as Pakistan’s largest economy, well ahead of the next two biggest cities Lahore and Faisalabad, which had a reported GDP (PPP) in 2008 of $40 billion and $14 billion, respectively. (projected to be $193 billion in 2025 at a growth rate of 5.5%).Karachi's high GDP is based on its large industrial base, with a high dependency also on the financial services sector. Textiles, cement, steel, heavy machinery, chemicals, food, banking, and insurance are the major industrial sectors contributing to Karachi's GDP.

Karachi is a metropolitan city also known as the city of lights. It is Pakistan’s hub of trade and economic activity and is also home to the country’s largest companies involved in shipping, textiles, automotive industry, entertainment, fashion, advertising, software development, and medical research. Karachi contributes 50 percent of exports, 65 percent revenue and also provides employment to people from all over the country.

The World Bank committed $652 million through three projects to strengthen institutions, municipal services, and infrastructure in Karachi. The projects will focus on urban management, public transport, and safe water and sanitation to enhance Karachi’s livability and competitiveness. This builds on findings of the Karachi Transformative Strategy, which estimates the infrastructure needs of $9-10 billion for the city. The three projects and the ongoing Karachi Neighborhood Improvement Project will help reduce this resource gap and help the city meet the needs of its women and men.

Karachi has been the pioneer in cable networking in Pakistan with the most sophisticated of the cable networks of any city of Pakistan and has seen an expansion of information and communications technology and electronic media. The city has become a software outsourcing hub for Pakistan.[citation needed] Several independent television and radio stations are based in Karachi, including Business Plus, AAJ News, Geo TV, KTN, Sindh TV, CNBC Pakistan, TV ONE, Express TV, ARY Digital, Indus Television Network, Samaa TV, Abb Takk News, Bol TV, and Dawn News, as well as several local stations.

What is Karachi city known for?
Karachi is a metropolitan city also known as the city of lights. It is Pakistan’s hub of trade and economic activity and is also home to the country’s largest companies involved in shipping, textiles, automotive industry, entertainment, fashion, advertising, software development, and medical research.

What country is the Karachi in?
Karachi is the financial capital of Pakistan and the capital city of Sindh Province. The city has been much admired since British colonial times for its location and economic potential.

Read More: What are Smart Cities?

"Visual Karachi: From Paris of Asia, to City of Lights, to Hell on Earth"